skip to main | skip to sidebar

I am an elementary school media specialist (librarian) and a new mom. My daughters (born 12/27/2010 and 6/27/2013) are teaching me all kinds of new things every day. One thing they have taught me is that sometimes, there just isn't room for much else besides learning. If you're not sleeping, eating, talking, blogging, or whatever, it might just be because you're TOO BUSY LEARNING!

I am fodder for satire and biting social commentary. 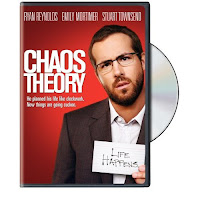 With more and more people jumping on the productivity bandwagon -- reading all the books, magazines, and blogs, and even becoming productivity hobbyists -- it's no surprise that productivity satire is beginning to creep into the media. Tyler and I watched Chaos Theory a couple of weeks ago. He liked it, and I did too, but I'm sure I appreciated it more than he did. I had to explain that even the main character, Frank Allen (played by Ryan Reynolds), is a really really thinly-veiled David Allen character. In the movie, Frank is an "efficiency expert" who has written a wildly popular book on productivity and efficiency and travels the country giving speeches at conferences about his system and how it works. (Frank's system is basically a list-making management scheme a la Getting Things Done.) So, I thought the movie was really well done and funny in an absurd kind of way, which also caused a bit of a sheepish reaction, since I could definitely be considered a productivity/efficiency/organization geek.

While I don't think my style of organization is particularly absurd, it does come off that way to people. Last night, we were talking with some friends, and Judy (who I love dearly) commented that she wished she had more of my gift for administration and organization.

I nodded, and my husband nodded vigorously, probably mentally noting the multiple lists I have strategically placed in at least three rooms in our small house and all over my office at work.

I paused but then nodded again ruefully, and my husband nodded vigorously, probably mentally noting the numerous occasions on which I have apologized to him for not doing things he didn't even know (or care if) I was supposed to be doing.

So, I guess one of the major pits that list-makers like me can easily fall into is irrational pressure placed on oneself with resulting unfounded and legalistic guilt.

But, like I told the group, I don't think my lists are a bad thing; they do help me work more productively and efficiently, and I'm getting better about the irrational guilt/pressure/legalism thing. That stuff happens because I'm a perfectionist, not because I'm a list-maker.

I'm going to keep on making my lists and reorganizing my closets and reading my productivity blogs, books, and magazines. I am a librarian, after all. And the nice thing about having a habit (or, gag, a hobby) that people view as absurd is that you can just laugh along with them because you know that whatever they think about it, your absurdity serves you well.

In my case, I think about how fortunate I am that my propensities and tendencies work so well for me in my chosen profession. I mean, really, could I have a job that more fully suits me? I think not. And what a blessing to have found this niche that I just knew had to be out there somewhere!
Posted by Unknown at 5:14 PM

I have the same problem with list-making and guilt. I have recently been making lists of things to do around the house while Will is at work, since I'm all home for the summer and whatnot... And then when I don't do them, I apologize profusely, and he's very confused as he doesn't think I've done anything wrong.

I still love making lists... even if I don't get them all done. Speaking of which, today's list is calling me... toodles!

I am an elementary school media specialist (librarian) in Greensboro, North Carolina. You can expect to read here about all kinds of things that make my librarian heart happy.